This document describes the architecture of WebSign, Cyph’s proprietary “secure web application” technology. WebSign was originally presented during our talks at Black Hat 2016 and DEF CON 24 (deck, video), and is now protected by US Patent 9,906,369.

A core technique involved is what we refer to as “HPKP Suicide”, an abuse1 of a web security standard called HTTP Public Key Pinning that essentially lets us “trick” the browser into behaving as though a server is persistently offline after its first interaction with that server.

General summary of HPKP Suicide’s steps (and the talk goes into more detail if needed):

After each iteration of these steps, any HPKP-supporting browsers that had hit the server at any point during the interval from step #5 will now treat the server as though it’s literally offline (AJAX requests will fail, attempts to navigate to the server’s hostname will bump into an unskippable error page, etc.) — which the server will have no power to undo without access to the private key it deleted in step #6. In other words, we’ve now (approximately) achieved the needed TOFU property.

Note: As explained further below, now that HPKP is deprecated, a fallback mechanism that accomplishes the same general effect is used instead. The details of HPKP Suicide are left here for historical reasons.

With this, we can now pin whatever logic we’d like using a web standard that facilitates offline web applications (often used for games that don’t depend on access to a backend API 100% of the time): AppCache (and/or its successor, ServiceWorker). Because the server is pseudo-offline, the browser will always fall back to the logic contained within the AppCache cache rather than pull untrusted code from the server.

In the case of WebSign, we take advantage of this to pin our code signing framework within the browser. Here’s a high-level overview of how these pieces all fit together: 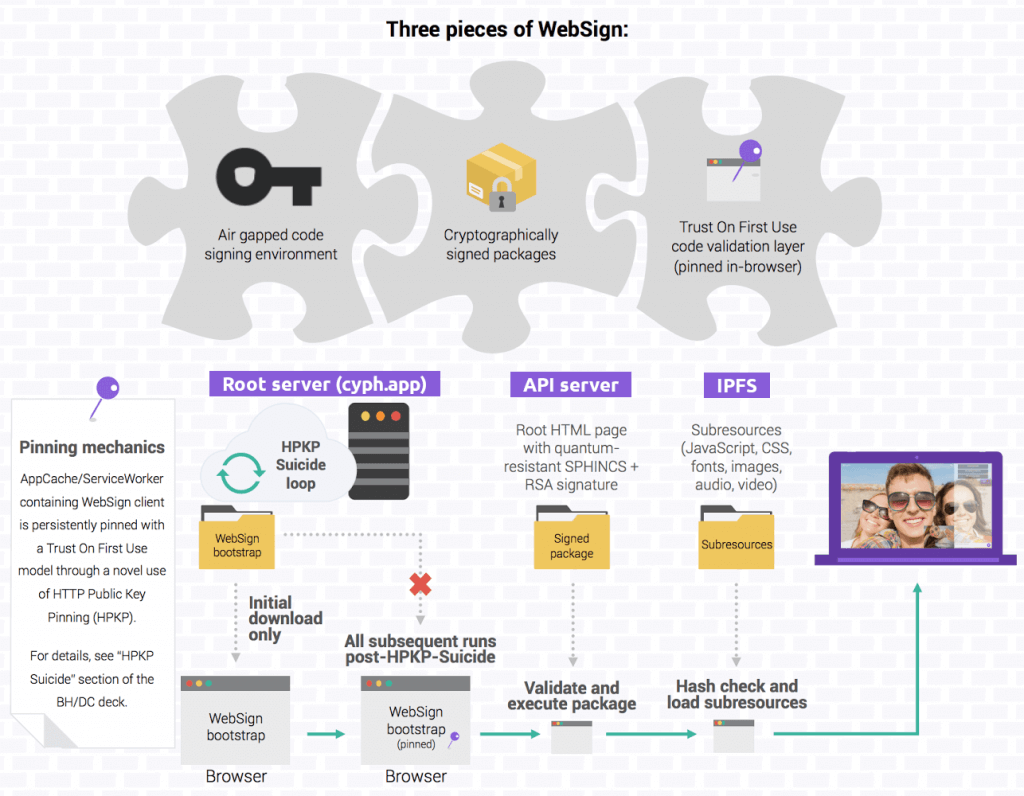 Specific mechanics of our code signing implementation are as follows.

While this all works very well for Cyph given that Cyph was from the start architected and developed against WebSign with its usage being a hard requirement, there are a number of considerations and caveats to keep in mind when evaluating WebSign for use in any other (particularly non-greenfield) software: